Letters to Santa – A Lesson in Faith 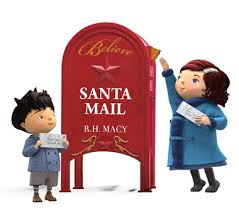 Walking through the mall I spotted the mailbox donned with holly and an elf standing guard with the words written in red “Letters to Santa”.  Santa was sitting in his big chair with bright eyed children waiting in line with exhausted parents; all wanting to sit on his lap and tell him what they wanted for Christmas.  All children truly believing that once they asked, they would receive.   Once they ask, they tell their friends “This is what Santa is bringing me for Christmas this year”; claiming it before they see it.   I envisioned children sitting at a kitchen table, with the help of their parents, writing out their wish lists for Santa.  Some would be writing to Santa for a new toy, and in some instances it would be one that their parents could not afford; but they didn’t know that, they just believed it would somehow be there Christmas morning.  Some would just want Daddy to come home, safe.  Not knowing how or when he would, but just believing.  Four year olds may write on their list that they want a real gun, like daddy’s to go hunting.  But that Santa, he was smart enough to know Johnny could not yet handle a real gun and it would surely bring him heartache and trouble should he receive it.  His mother or father would explain why he likely would not get that this year, as he continued on with his list. I recall as a child getting an empty piece of paper and writing my hearts desires on it for Christmas and I didn’t know how it would happen, I just knew it would because I believed.  I had faith in a man I couldn’t see who would come into my house at night and leave those things on my list that would be good for me.

As I continued to walk through the mall, God spoke to my heart and said “This is the start of Faith – if only as adults you still believed in ME that way.”  “Faith like a child” those words immediately came to mind.  I thought about the similarity … how as adults we can write down our requests, dreams and visions and with faith we go to the Father with our list.  Not always knowing how it will come to pass, but believing in our hearts that it will.  Like the small children telling their friends what they will be getting, we can claim the victory before we see it. That’s faith.  As adults we can forget that our heavenly father is the one who merely had to speak the word and it came to pass, that we have a big God!  His word tells us “all good things come to those who love the Lord and are called according to His purpose” – Romans 8:28.  And “The earnest prayer of a righteous person has great power and produces wonderful results.” James 5:16 or Luke 1:37 “Nothing is impossible with God.”  And then I remembered my “prayer lists”.  I write down those prayer requests I hear or those that are laid on my heart in a book and I date it.  I went home, got out my prayer list journal and as I scrolled through the pages of my “wish list” it was amazing to see the prayers that had been answered over the past year.  Jobs, healings and restored relationships for my friends and family.  What a good reminder it was to look through that book and remind myself “God is faithful to hear us”.   I thought about my own life and how this last couple of years has been a true lesson in faith.  Just like the children with their wish lists for Santa, I wrote out mine and I didn’t know in many instances how God was going to work it out.  I just believed He would as I took it to Him in prayer.  And I can tell you that many things on my list I received and a few I did not.  I learned a long time ago that shut doors and a “no” are sometimes blessings in disguise.  Just like the four year old wanting the real gun, there are things that can harm us that we ask for and we may not be able to see that until later down the road.  That is where you need that extra measure of faith, knowing that there is a reason and it will all work out in perfect timing, just as it should.

I encourage you this Christmas Day to make your own list, with the desires of your heart, and take it to your heavenly father in prayer daily; just like the children write out their lists to Santa and then remind their parents often of what they want.  Be like the child who doesn’t just list all they want, but the one who hopes Santa brings something for their brother and sister.  Pray for one another and then believe!