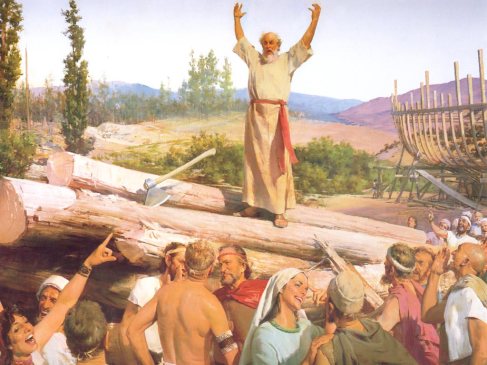 After the great flood, and the battle of Jericho, I’m sure Noah and Joshua looked like very strategic warriors. In fact? It’s been over a thousand years and we are still talking about them. But I dare you to imagine for one moment what it was like before the flood, when Noah was building a huge wooden vessel on dry ground and telling everyone that God told him to.  My guess?  He was mocked, harassed and likely labeled crazy. And what about Joshua? Instead of storming Jericho with swords a blazing?  He marched around the city, repeatedly.  Can you imagine what the onlookers must’ve thought?  What are those guys doing?  How in the world can they possibly think they will defeat us by simply marching around our fortress walls? But the flood came, and the walls came tumbling down.  Why?  Because GOD SAID THEY WOULD.  Noah and Joshua likely appeared crazy to others during two entirely different situations, but both for the same reason.  That reason? Because God said to move, and they were obedient.

God still speaks to us today, the same as he did to those in the bible. The problem is? Many lack a holy boldness, afraid to step out on faith. Instead? We only step out when data, facts and analysis support a move.  We pray for Him to move, but often with restrictions on our comfort zones.  Our favorite sermons are when preachers tell those stories of how God moved in the lives of those who were obedient. People who have left jobs that made sense, and followed their purpose on faith. We get excited and expectant when we hear how they were rewarded for their obedience and what a difference they may have made! On the good side of great acts of faith? We salute and applaud them for being obedient. But just like Noah and Joshua, what about before the manifestation of the obedience is visible? What about when it’s your son, daughter or best friend who tells you that God told them to move to another country to work in the ministry? Or sell everything they own and use the money to build a shelter? Our responses can tend to change based on our love and concern for our family or friends, instead of our faith in God. (Yes, we must be careful that our loved ones aren’t using “God told me to” as an excuse but they haven’t prayed or been to church in years.  But when you know the person? When you know they’ve been on their face praying, fasting and seeking God’s will?  Then maybe, just maybe, we should support them on the front side of the obedience.)

If God is speaking to your heart? Be bold! Be fearless! I think about the article and video I saw a few months ago of the young boy who prayed in a school hallway in West Virginia. The video went viral, and it inspired others to be bold in their faith. We believers? Applauded his bravery. But what about before the video went viral? Before the hits and follows on social media, he was just a young man with strong convictions that was obedient when the Lord said to move. A young man who was likely nervous thinking “What if I get in trouble?” “What if I get mocked or made fun of?”

“Blessed are ye when men shall revile you, and persecute you, and shall say all manner of evil against you falsely for my sake.” – Matthew 5:11

Most often it’s not “You need to pick up and move to another country.”  Often?  He just wants us to speak up when others are silent. To love when others hate. To forgive when others hold anger. (Kind of like building an ark on dry ground and marching around a city wall instead of marching in with swords drawn).   God says he will use the foolish to confound the wise.  That Love wins every time.   Are you letting him use you??  Are you being obedient when He says move?